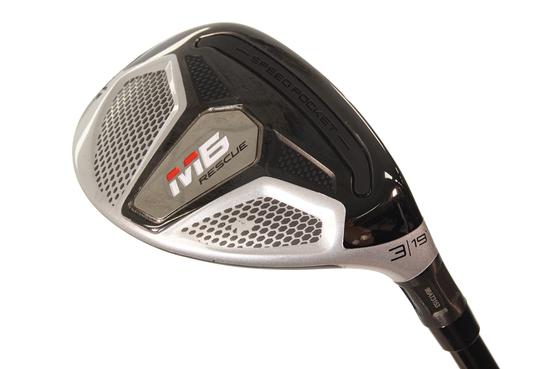 4 ⭐⭐⭐⭐ This TaylorMade M6 Rescue has been fully tested and serviced by our team of golf experts and works like new. There are some signs of previous use, but what fun is a rental if you don’t use it? Any signs of previous use are minor and superficial and there are no notable marks or scratches. All the photos to the left are of the item you would receive so you can see for yourself (yes, we really have someone downstairs photographing every preloved product). Features: Fujikura Atmos 7 S-Flex shaft. Includes: head cover.

The TaylorMade M6 Rescue features the ground-breaking Twist Face Technology for the first time in a hybrid. This unique face curvature reduces the side spin for straighter shots.
An ultra-lightweight steel-body construction creates a lower CG within the head for easy launch and alignment, whilst a thinner face improves the ball speeds from all strike locations on the face.

The Speed Pocket returns and improves the ball speeds on off-centre strikes, especially the ones that are low on the face

Reflecting the changes in the fairway woods, the new TaylorMade M6 rescue is the first time Twist Face technology has been applied in a rescue club.

The curved Twist Face was more evident in the smaller face of the steel-bodied M6 rescue compared to a bigger driver or fairway wood so to get around it, TaylorMade have altered the multi-tone crown visuals on the M6 rescue to make the Twist Face less noticeable to the eye.

A stepped crown helps to align the M6 rescue while also lowering the CG which, together with a faster face, boosts ball speeds and distances to levels never achieved in a TaylorMade rescue.

The men’s M6 rescue is appointed with a Fujikura Atmos Orange HY shaft while the women’s M6 gets the TaylorMade Tuned Performance shaft.