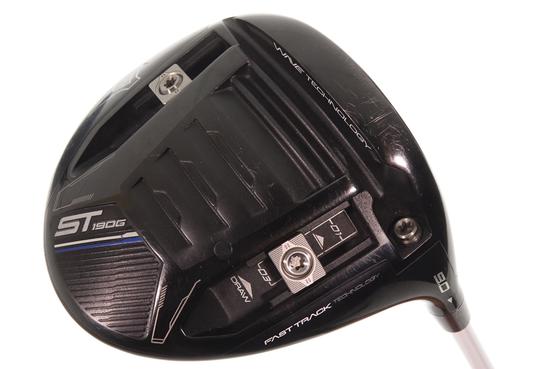 3 ⭐⭐⭐ This Mizuno ST190 Driver has been fully tested and cleaned by our team of experts and performs perfectly. It does show obvious signs of superficial wear, but after all you need to be able to use your rental! All the photos to the left are of the item you would receive so you can take a look (yes, we really have someone downstairs photographing every preloved product), any obvious wear or marks have been highlighted so you can see for yourself. Features: Fujikura Atmos Tour Spec 6S shaft and includes a head cover.

Amplified Wave Sole - A heavily amplified 1st wave configuration expands the ST190 CORAREA for improved balls speeds across the clubface and reduced drop off from off centre strikes.

Kei Tsjui – ST190 Lead Designer - “The ST190 marks a total change in how Mizuno approaches wood design.  We now start the development process with our tour players.  The tour tested moulds then become our production moulds.  In the case of the ST190, this produced a high-speed driver with extremes low spin for the tour, but with the capability of increasing spin for lower swing speed players.  We also learned to slightly roll back the level of adjustability to gain performance.  Losing the central weight track helps reduce the lower end of spin rates and gave us the design freedom to deliver a 3mph ball speed increase on our previous models.”

Chris Voshall - Mizuno - “One thing that’s increasingly evident is the increasing trend to a lower spin bias on tour - so many players we’ve tested with favour a downward angle of attack.  They need their driver to knock the spin down to compensate, which became our 2nd objective with the ST190.   No.1 was always ball speed – if we can add 1mph, that’s what we’re going to do.”

Keith Mitchell – PGA Tour Professional - “Driving was my best category last year – I walked into testing to do ‘Cookie’ (Mizuno, PGA Tour Manager Jeff Cook) a favour, give him some numbers and leave.  It turned out to be the easiest change I’ve ever made – on the one club I never thought I would switch.  The ST190 was faster, straighter and more forgiving than what I was playing.  I’ve used it ever since and haven’t considered taking it out.”