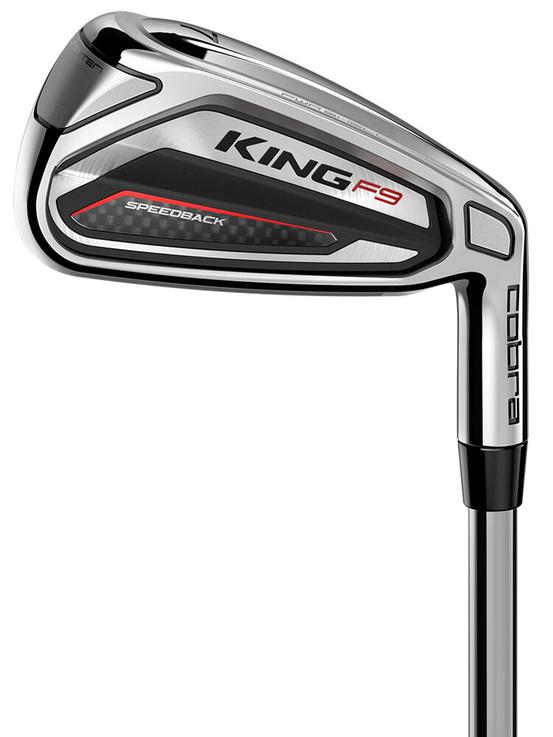 The new Cobra F9 irons achieve a low and back CG location by adding a belt of steel around the perimeter of the iron, improve launch, spin whilst maximising ball speed. A combined 33 grams of tungsten is added to the heel and toe of the 4-7 iron, increasing MOI by 10 percent, high inertia and enhances ball speeds from all strike locations on the face.

An E9 variable thickness face expands the sweet spot whilst a PWRSHELL undercut sole absorbs vibrations and improves ball speeds across the face.

The F9 line-up also boasts new irons that share the Speedback philosophy, but with a slight twist.

Rather than a combination of CG and aerodynamics, the game-improvement F9 irons get the Speedback treatment through a perfect blend of low CG and high MOI (moment of inertia). Speedback is achieved thanks to a band of steel that wraps around the irons’ perimeter to lower the CG, while the presence of high-density tungsten in the heel and toe of the 4-7 irons boosts the MOI.

CNC face milling ensures consistency and makes it possible to sculpt a variety of groove profiles through the set that optimise the spin and launch angle of each iron. A reconfigured face on the F9 irons expands the sweet spot while a new insert on the back reduces vibration and improves acoustics at impact.

And Cobra's faith in Speedback technology means they are proud to declare that the new F9 Speedback irons are the longest, fastest and most forgiving game-improvement irons they have ever produced.