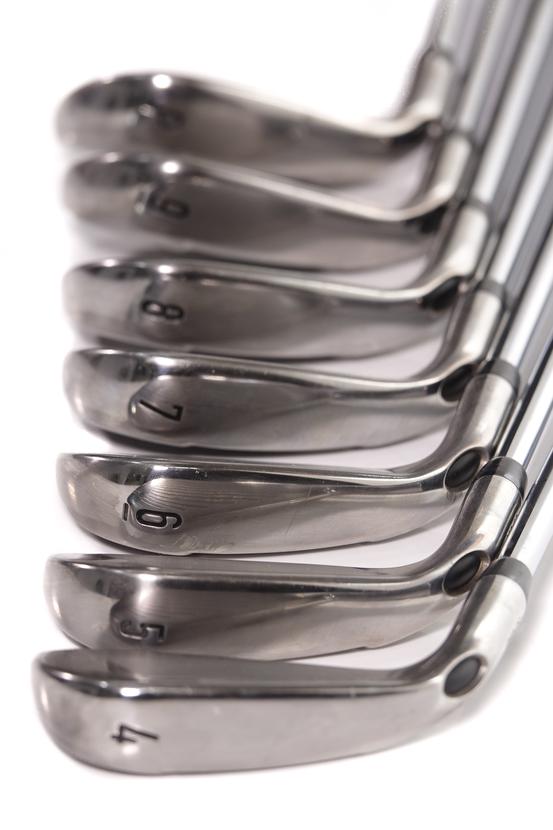 The Callaway Steelhead XR Iron Set 4-PW is in great working condition, but shows some contact wear that is isolated to the sole and face of the clubs. This set features a true temper XP STI5 S300. The loft angles on this set are 4, 5, 6, 7, 8, 9, P.

Steel has long been the dominant material used for making irons. Yet Callaway stands alone for possessing unique steel-working talents that have allowed us to create a long history of sophisticated iron designs that combine modern performance-enhancing technologies with clean, strong shapes that appeal to the eye from every angle. It's a skill that we've worked tirelessly to develop and which we guard closely.

The newest addition to the XR family, Steelhead XR irons, combine the beautiful shaping and playability that made the Steelhead X-14 one of the most popular irons of all time. We paid special attention to some of the design aspects on the original Steelhead iron, including a slightly longer blade length, a slightly more rounded toe and the signature hosel-to-face transition.

The speed and distance of Steelhead XR irons is based on our next-generation 360 Face Cup technology, which allows the edges of the ultra-thin face to freely flex and release at impact with greater efficiency, adding ball speed that promotes more distance, especially on off-center hits. The boost in face-speed is so significant that it's hiked the COR up to almost .830 -- the USGA limit.

More speed and distance on mis-hits is made possible by the modern Hollow Bore-Thru hosel design, which allowed Callaway engineers to remove useless weight from the hosel and reposition it in strategic areas within the head to: 1) Increase MOI for more forgiveness on mis-hits. 2) Precisely position the CG strategically in the long, middle and short irons. Steelhead XR long-irons feature an exceptionally low and far-back CG to make them easier to launch high and long. Middle-irons have an exceptionally low and mid-back CG to promote easy launch and keen control. Short-irons have a low and mid CG to make them easier to promote lower, high-spinning shots ideal for attacking the pin.

Great feel and sound come from our new steel-infused polyurethane layer positioned low in the head, behind the lower portion of the face. In addition to absorbing unwanted impact vibration to promote a remarkably satisfying sound and feel at impact, it also helps lower the CG to promote faster ball speed and higher launch characteristics for more distance.

Put it all together and you have an iron that delivers the finest combination of speed, forgiveness, distance and control to ever emerge from the Callaway R&D department. For a brand with Callaway’s history of innovation and performance, that's saying a lot.

Higher Launch and Better Feel from Steel-Infused Polyurethane Layer
A bar of steel-infused soft urethane layer positioned behind the lower portion of the face serves two functions. 1) Absorbs unwanted vibration for great feel. 2) The integration of steel into the urethane adds weight, which lowers the head's Center of Gravity for faster ball speed on low hits and higher launch characteristics.

More Control and Distance from Progressive Center of Gravity Positioning
The CG is positioned strategically in each iron to promote easy launch and long carry in the long-irons, easy launch and keen control in the middle-irons, and lower and high-spinning shots in the short-iron