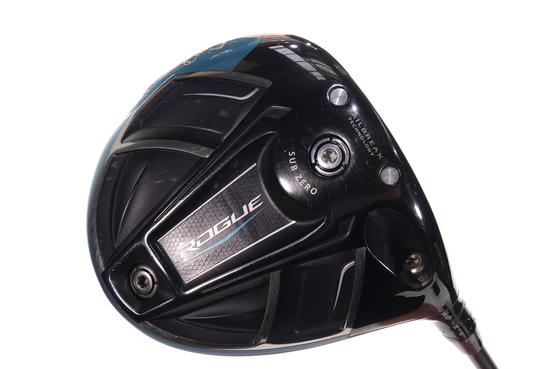 This Callaway Sub Zero driver is in a good physical and working condition, showing only minimal signs of previous use. The club features a HZDRUS Project X 6.0/ 2.9 Degree/ 76g/ Low Spin S Flex shaft. The club includes a head cover. Does not include adjustment tool.

Rogue employs improved Jailbreak Technology with new, hourglass-shaped titanium bars that are 25% lighter, while fulfilling their function to stiffen the crown and sole. The stiffer body allows the face to take on more impact-load to promote faster ball speed, and makes possible the new X-Face VFT face architecture, which promotes fast ball speed across an expansive area of the face. Together, Jailbreak and X-Face VFT work together to create what Callaway call the Jailbreak Effect, which promotes a remarkable boost in ball speed and distance.

More MOI and Forgiveness from a Triaxial Carbon Crown

Callaway is the leader at using carbon composite materials to enhance metalwood performance. Thier proprietary triaxial carbon composite is extraordinarily light and strong, saving substantial weight. They’ve redistributed that weight into the head’s perimeter to significantly increase MOI and forgiveness, which helps preserve distance and direction on off-centre hits. Rogue has the largest triaxial carbon crown of any Callaway driver ever.

Two interchangeable weights (2-gram and 14-gram) to adjust spin-rate and launch angle. Put the 14-gram up front to lower spin, or in back for higher launch and increased MOI.

Boeing and Callaway collaborated to develop the Speed Step technology used in past Callaway metalwoods. In Rogue, they worked with Boeing to redefine the geometry of the leading edge to improve airflow to promote faster head speed.