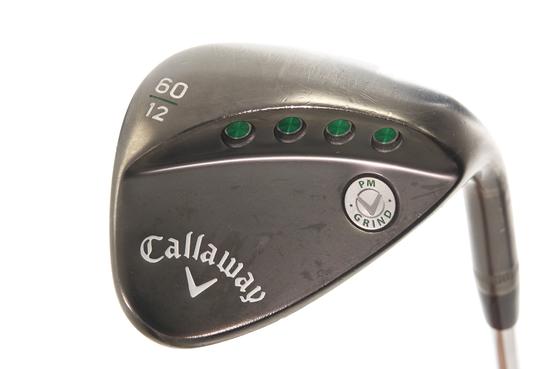 3 ⭐⭐⭐ This Callaway PM Grind Chrome Wedge has been fully tested and cleaned by our team of experts and performs perfectly. It does show obvious signs of superficial wear, but after all you need to be able to use your rental! All the photos to the left are of the item you would receive so you can take a look (yes, we really have someone downstairs photographing every preloved product), any obvious wear or marks have been highlighted so you can see for yourself. Features: KBS HI-REV 2.0 115 shaft.

Positioning the micro-grooves on a 20º angle in relation to the standard grooves promotes added spin on chips, pitches and lobs.

Increased offset and higher centre of gravity from the higher toe together help players control trajectory on full and partial shots.

Generous relief at the heel and toe promote crisp, clean contact from a variety of greenside lies.

First, some background. The original PM Grind started as a one-off prototype built expressly for Phil back in 2014. It was characterized by a uniquely shaped head with an exceptionally high toe and expansive face area, including grooves spanning the entire face, both from side-to-side and up-and-down; all to help Phil hit his famous “Phlop” shots. Phil’s satisfaction with the prototype led Callaway to introduce it to the public, in 2015. That resulted in a new, high-performance wedge category, but though others have tried, none have come close to matching the unique combination of shape, technology and performance of the PM Grind.

This year Phil began working with Roger on improvements to the PM Grind that make it easier to hit three essential shots Phil thinks every golfer needs:

1) The Knockdown -- a low-flying, high-spinning shot ideal for attacking the pin.

2) The Hit & Check – a short pitch that bounces twice and stops.

Phil conferred closely with Roger on the improvements necessary to help any player hit these three shots. The result is PM Grind 2019, a truly astonishing achievement in wedge design. The changes Phil and Roger implemented are:

Callaway’s Groove-in-Groove technology was introduced last year in our Mack Daddy 4 wedge. It entails four micro-positive ridges machined into flat parts of the face, parallel to the grooves, creating 84 points of contact with the ball. The ridges form a micro-groove between them, which is why it’s called Groove-in-Groove. For PM Grind 2019, Phil suggested machining the micro-grooves into the face at a 20º angle, making them perpendicular to the target-line, or close to it, when you open the face, promoting more spin on lob shots. Callaway testing indicates that offset Groove-in-Groove placement promotes an increase of up to 12% more spin on lob shots.*

Increased Offset and a Higher Toe

“Offset” in a clubhead is the distance between the front edge of the hosel and the leading edge of the clubface. Increasing the amount of offset in the PM Grind 2019 makes it easier to move the ball back in your stance and position your hands ahead of the ball, which is necessary to hit a knockdown. The higher toe, made possible by removing weight from the sole (represented by the four holes in the sole, each filled with a metallic green aluminum cap) pulls the CG location upward to promote a lower trajectory, with the added benefit of creating more space high on the face, which is helpful on lobs from tall grass. * Based on robot testing versus Mack Daddy PM Grind

The C-Grind, with significant relief at the heel and toe, is well known for smooth and clean turf interaction, promoting solid contact from all types of lies.