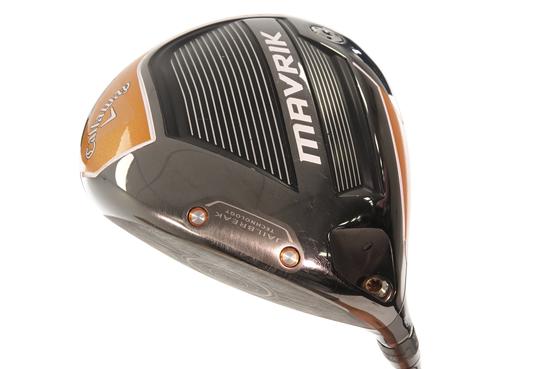 3 ⭐⭐⭐ This Callaway Mavrik Max Driver has been fully tested and cleaned by our team of experts and performs perfectly. It does show obvious signs of superficial wear, but after all you need to be able to use your rental! All the photos to the left are of the item you would receive so you can take a look (yes, we really have someone downstairs photographing every preloved product), any obvious wear or marks have been highlighted so you can see for yourself. Features: HZRDUS Smoke Black 70g S-Flex shaft. Includes: head cover.

MAVRIK MAX is well suited for players who want a long, easy-to-hit driver with the ability to reduce slices off the tee. It has the largest footprint of the three models, boasts the highest MOI, is the easiest to launch, and has the most draw bias capability. For golfers who struggle with impact dispersion, MAX offers a tremendous amount of high-speed surface area on the face. MAX also incorporates two interchangeable weights, 14g and 2g, positioned in the sole near the heel and center-back. Installing the heavier weight in the heel creates maximum draw bias; installing it in the back creates maximum MOI. Available in 9º, 10.5º and 12º lofts.

More about the MAVRIK

Epic Flash set new boundaries by being the first driver developed with the aid of Artificial Intelligence and Machine Learning, which led to it being the #1 selling driver model in 2019. To push performance even further, we adopted a maverick’s rebellious and disruptive attitude. That’s how our world class R&D team created the new MAVRIK line, with the finest combination of distance, forgiveness, consistency and feel we’ve ever built in a driver.

With MAVRIK we invested in a new and more powerful supercomputer, which significantly advanced our understanding of A.I. and Machine Learning. And we discovered how to apply A.I. to make smarter and wider-ranging performance improvements in the face and throughout the clubhead. The incredible innovations in this driver are led by a new Flash Face SS20 architecture, with a thinner face and more expansive area that delivers ultra-fast ball speeds. The supercomputer operated for weeks, through thousands of virtual prototypes, until it arrived with a completely new face architecture, created to specifically work with the head of each MAVRIK driver.

The complexity of each MAVRIK Flash Face SS20 design demanded a stronger material to stand up to the stress of impact, so for the first time we’re using FS2S titanium in a club face, an exotic material that is remarkably strong and light—a full 6 grams lighter than traditional materials. From this high end titanium, we can consistently maintain ball speeds without sacrificing any integrity in the club face.

In addition to all the remarkable new technologies in MAVRIK Drivers, we’ve utilized several proven technologies that are crucial to the overall performance – Jailbreak and a T2C Triaxial Carbon Crown. Jailbreak features two internal bars behind the face that connect the sole and crown to promote faster ball speed. And our T2C triaxial carbon crown is significantly lighter than a titanium crown, allowing our engineers to redistribute additional weight to raise MOI and forgiveness.

Callaway’s R&D team also took maverick thinking well beyond the club face, using A.I. to help tune the acoustics of the head. Specifically, they used A.I. to optimize the internal structure and position of numerous ribs to create an immensely satisfying sound and feel.