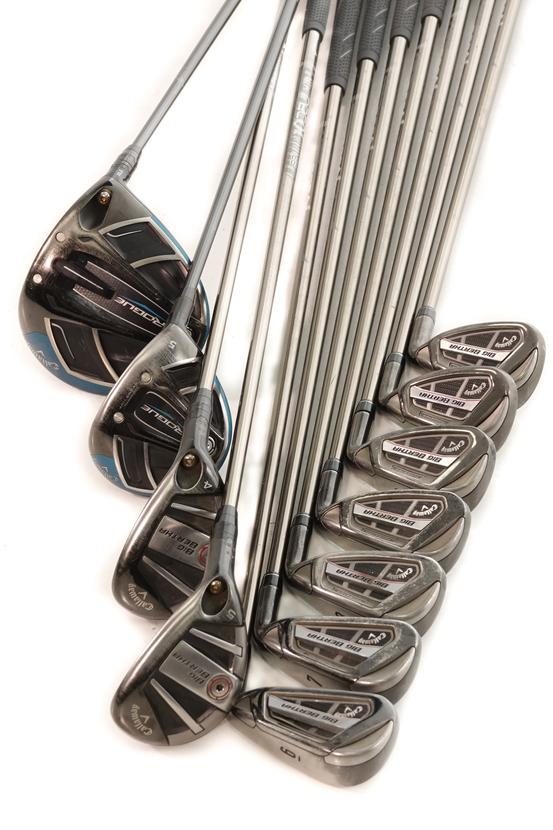 3 ⭐⭐⭐ This Callaway Rogue/Big Bertha Package has been fully tested and serviced by our team of golf experts and works perfectly. It does show some signs of superficial wear, but after all you need to be able to use your rental! All the photos to the left are of the clubs you would receive so you can take a look (yes, we really have someone downstairs photographing every preloved product), any obvious wear or marks have been highlighted so you can see for yourself. Includes: Callaway Rogue 10.5 degree driver (Aldila Synergy 50g A-Flex shaft w/ headcover), Callaway Rogue 5 wood (Aldila Synergy 60g R-Flex shaft w/ headcover), Callaway Big Bertha OS 4-5 hybrids (UST Mamiya Recoil ES 460 F2 A-Flex shaft w/ headcovers), Callaway Big Bertha OS 6-SW irons (UST Mamiya Recoil ES A-Flex shaft), Callaway Hyperlite S cart bag, club cover, umbrella cover, and a Garmin Approach S60 golf watch. Please note the price has been reduced due to the bag missing the stands.

The Callaway Big Bertha OS range is the ultimate forgiveness and distance package. It will largely be targeted at the higher handicapper and golfers who require assistance with launch.

The Exo-Cage makes the body of the iron more durable, which allows the weight to be placed in a more effective position within the iron head. This also allows for the 360 Face-Cup Technology to be installed. The Face-Cup innovation has increased ball speeds in Callaway products for the last few years and continues to boost ball speeds from all strike locations on the club face for added forgiveness.

Overall, these changes have repositioned the CG location in the longer irons to a lower part of the head to assist launch. The shorter irons however, do not feature any launch aids. As the OS irons feature a progressive CG location through the iron set.

"Most higher handicappers can still handle the short irons quite well. Super game-improvement irons are not a definition of the entire bag any more"

The Big Bertha OS irons rank as Callaway’s most forgiving in its current iron lineup, and the same can be said for the Big Bertha OS hybrids, which were designed to be exceptionally easy to hit and launch without having to sacrifice distance

Callaway’s next generation Hyper Speed Face Cup is the key component in the distance generated by the Big Bertha OS hybrids, as it enables a clubface that delivers incredible ball speeds, even on off-center hits.

Additionally, a larger overall clubface makes the face more flexible for enhanced distance, while also inspiring confidence from players at address, and the use of a Boeing inspired Speed Step on the crown helps produce faster swing speeds.

Meanwhile, the higher launch that the Big Bertha OS hybrids produce is made possible by a low CG placement in what from a profile standpoint is a deeper overall clubhead, which also improves MOI by creating more stability at impact.

And finally, unique to the Big Bertha OS is that this is the only hybrid in the current Callaway lineup that features an adjustable hosel, which gives players the option to adjust loft by three degrees (+2/-1), as well as set the club up with either a neutral or draw bias. That combination of adjustability not only allows players to hit these hybrids the precise distances that they want but they can also better control trajectory and ball flight.

The Rogue Driver delivers exceptional ball speed from the combination of new Jailbreak Technology and X-Face VFT plus an increased MOI for a breakthrough in driver performance.

Rogue employs improved Jailbreak Technology with new, hourglass-shaped titanium bars that are 25% lighter, while fulfilling their function to stiffen the crown and sole. The stiffer body allows the face to take on more impact-load to promote faster ball speed, and makes possible the new X-Face VFT face architecture, which promotes fast ball speed across an expansive area of the face. Together, Jailbreak and X-Face VFT work together to create what Callaway call the Jailbreak Effect, which promotes a remarkable boost in ball speed and distance.

More MOI and Forgiveness from a Triaxial Carbon Crown

Callaway is the leader at using carbon composite materials to enhance metalwood performance. Thier proprietary triaxial carbon composite is extraordinarily light and strong, saving substantial weight. They’ve redistributed that weight into the head’s perimeter to significantly increase MOI and forgiveness, which helps preserve distance and direction on off-centre hits. Rogue has the largest triaxial carbon crown of any Callaway driver ever.

Boeing and Callaway collaborated to develop the Speed Step technology used in past Callaway metalwoods. In Rogue, they worked with Boeing to redefine the geometry of the leading edge to improve airflow to promote faster head speed.